Discover the best things to see and do with just 24 hours in Berlin, and enter to win a European holiday with AccorHotels in this exclusive #AccorHotels24hrs travel contest

I’ve teamed up with AccorHotels as an ambassador for their autumn travel contest promoting 24 hour city visits (see details below). You can enter to win the contest by writing a blog or creating a video about 24 hours in your favorite city between the dates October 26 and December 7. Naturally, I’m writing my 24 hours on my favorite city—Berlin!

Berlin is one of Europe’s most magical cities – there’s no question about it. Berlin is at the heart of two worlds: at the center of Europe’s complicated 20th century history, but also the star of 21st century Europe politically, economically and culturally. So, with just 24 hours in Berlin–how could you possibly see and do the best of both worlds?

Thankfully, much of the city’s incredible history is available everywhere—literally under your footsteps no matter where your feet might land. On the sidewalks you’ll find stolpersteine—gold stumbling block memorials left as reminders of the Holocaust—and a brick path tracing the infamous Berlin Wall. But even with just a single day in Berlin, there’s much more than history to discover here. These days, it’s the legendary Berlin nightlife (which often goes on nonstop for entire weekends) and the rising art and culinary scene making Berlin one of Europe’s most exciting, magical cities. 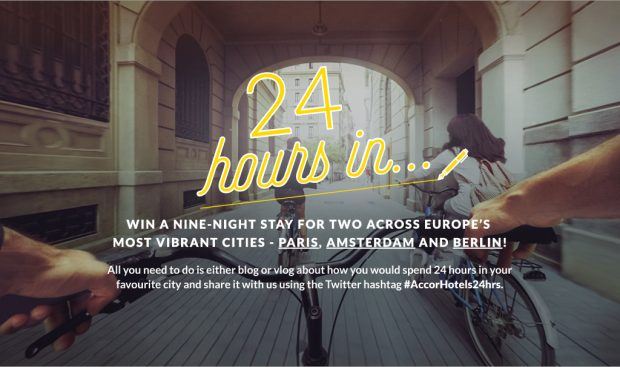 #AccorHotels24hrs
Win a trip to Paris, Amsterdam and Berlin!

I’ve teamed up with AccorHotels to give away some awesome travel prizes. One grand prize winner will receive a GoPro camera and a nine-night stay in Paris, Amsterdam and Berlin (3 nights each!) with transportation from London and between each city via Eurostar, British Airways and Thalys. City passes for local public transport, tourist attractions and discounts will also be provided. Runner-ups (2) will receive GoPro cameras.

To be eligible for entry, participants must write a blog post or create a video around the theme “24 hours in” and notify the promoter by sending a link to the entry either via the @Accorhotels Twitter account or via email to [email protected]netbooster.com. 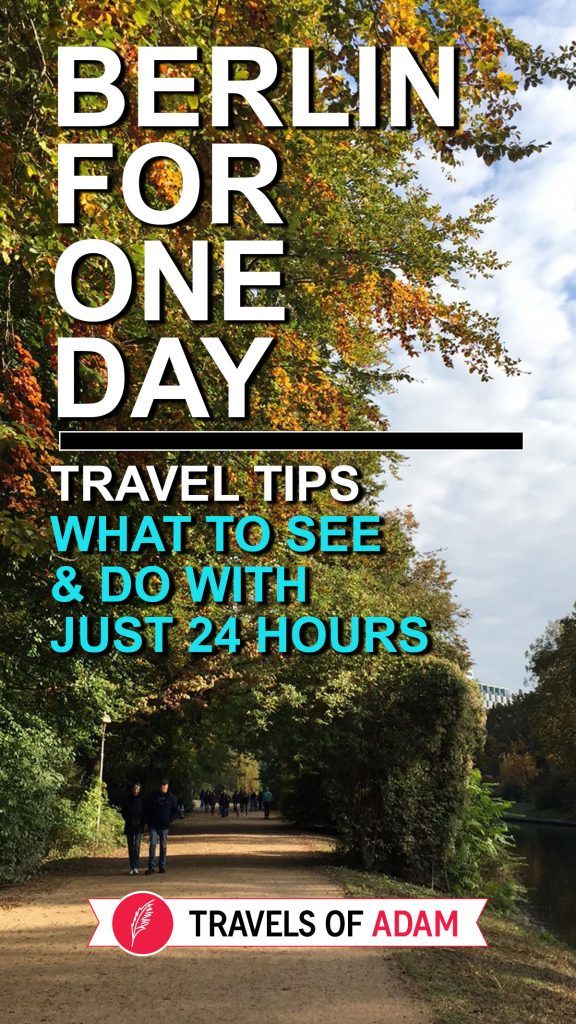 How to See Berlin in 24 Hours

First, you’re going to need a day pass for the Berlin U-Bahn. The metro system is easy to navigate and will get you around the city quickly—even if you don’t speak German! With a day pass you’ll be able to travel everywhere you need to go without worrying about buying tickets repeatedly. While renting a bike can be a great way to see the city (especially on a rare summer day), the U-Bahn will get you to all the major tourist hotspots—and on weekends it’s open 24 hours! The Berlin WelcomeCard offers unlimited travel on the trams, trains and buses plus discounts on certain museums and attractions.

Also, make sure you’re dressed comfortably for a day in Berlin. You should be prepared to walk a lot, but it can be helpful to be aware of the unique Berlin style if you want to fit in with the locals (and maybe go dancing in one of Berlin’s many nightclubs). Even for exploring the nightlife, your shoes should be flat and comfortable. There aren’t many places worth wearing high heels.

Assuming you arrive in Berlin early, don’t expect a lot of places to open early. This is a late-night city. However, some of Berlin’s best historical monuments are all available to visit for free in the open-air, so with just a day in Berlin, start there. Berlin’s central district, Mitte, provides a perfect base for understanding Berlin’s history and with it you can spot a number of the city’s most important memorials. There’s even a free 4-hour walking tour every day leaving in front of Berlin’s Brandenburg Gate from 10am onwards.

If you don’t have so much time, you can hit the major sites on your own. In the area, you’ll find the Reichstag (which you can visit for free with a pre-scheduled appointment). From there, it’s an easy walk to Brandenburg Gate and the four distinct Holocaust memorials in and around Tiergarten park. The most famous of which is the Memorial to the Murdered Jews of Europe, but you’ll also find memorials dedicated to gay and lesbian victims, handicapped and disabled victims and the Sinti and Roma populations.

From Brandenburg Gate, you can make yourself over to Potsdamer Platz—Berlin’s sprawling commercial district which today is home to a number of different attractions. There’s the Berlin Spy Museum (great for families or James Bond geeks), the Mall of Berlin (great for shoppers), the Topography of Terrors (an historical museum detailing the history of the Gestapo and SS), the Martin-Gropis Bau (a contemporary art museum) and the world-famous Checkpoint Charlie.

While in Mitte, the area between Hackesher Markt and Rosenthaler Platz is a great place for afternoon exploration. Affordable and trendy restaurants like Shiso Burger, Cocolo Ramen, I Due Forni, Yumcha Heroes and W Der Imbiss, offer great lunch deals. In the area, you’ll also find cool shops, trendy cafés and small museums and galleries. The magazine-only bookshop, Do You Read Me and the art bookshop Gestalten Space are as pretty as they are useful—with a diverse and unique curated collection of products.

Enter to win a trip to Berlin!

After exploring an introduction to Berlin’s history and the hip area of Mitte, it’s best to make your way into Berlin’s more contemporary culture. Get on the U-Bahn and visit Kreuzberg. Between the stations of Schlesisches Tor U-Bahn and Kottbusser Tor, you’ll be in the center of Berlin’s most hipster neighborhood. Street art covers the walls of buildings, bars and cafés overflow with bearded guys in baseball caps and girls in short, black dresses. Take a walk down Oranienburger Strasse at dusk, especially on a warm, summer day, and the sights and smells are sure to overwhelm—in a good way!

This is the Berlin I know, the one that I love. Where there’s history everywhere around you, but people are still living their lives, creating new art, new movements and doing new things. Kreuzberg has been at the fringe of Berlin for a long time. During the time of the Berlin Wall, the neighborhood was part of West Berlin, butting right against the wall—an area popular with immigrants. Much of that energy is still there today and, as a tourist, it’s easy to find it in the small, indie nightclubs, bars, budget restaurants, galleries and cafés that line the streets of Kreuzberg. 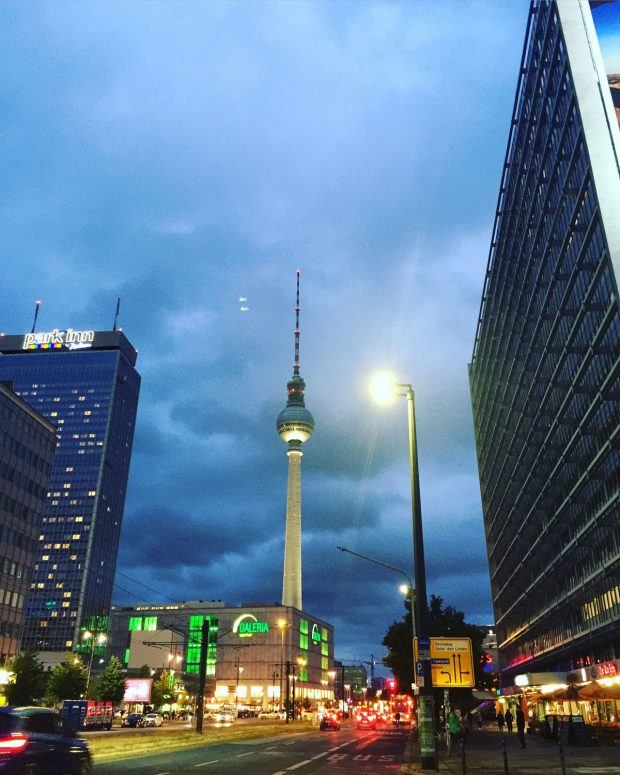 If you’re looking for a taste of Berlin’s nightlife, make your way to some of my favorite Kreuzberg bars. Tante Emma and John Muir serve great, innovative cocktails. Facciola, on the edge of the hip Görlitzer Park, serves amazing Italian food alongside affordable, top-quality wines imported from Italy. And craft beer bar Hopfenreich serves a seemingly endless supply of local and international craft beers. When the night starts to turn to morning again, the clubs will be in full swing. Club der Visionaire is a barge located on the shores of the Landwehr canal pumping techno music all day and night on the weekends. And the new Birgit and Bier beer garden is an indoor/outdoor club open from the afternoon and regularly hosting a number of different parties and festivals.

Visiting Berlin in a single day can be a challenge—there’s just too much to see and do! Stay energized when following the above itinerary with Berlin’s local favorite drink—Club Mate. It’s a caffeinated energy drink made from South American mate tea that tastes a bit like stale beer mixed with cigarettes and piss—but don’t let that turn you off! It’s got a kick and it’s sure to keep you on the move all day long. No Berlin itinerary would be complete without it! 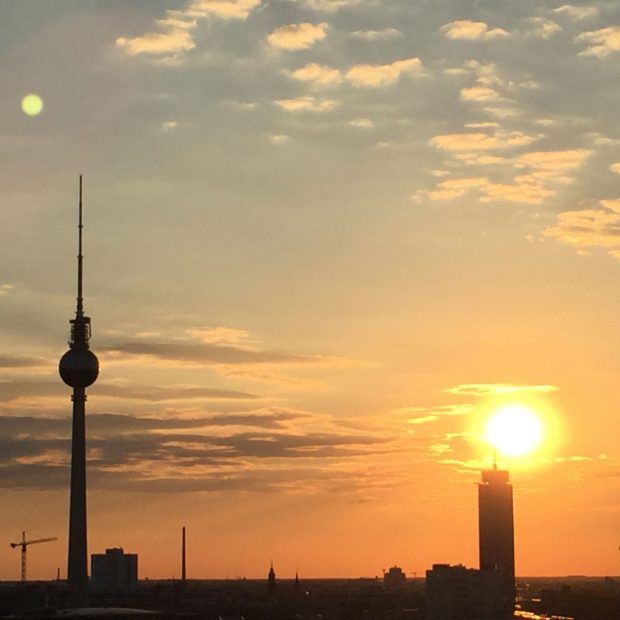