The cool, hip Brooklyn borough of NYC is also one of the most queer places in NYC with something for everyone—no matter where you fit on the LGBTQ spectrum. Check out this guide to the best of LGBT Brooklyn bars, clubs, restaurants, and LGBTQ-friendly hotels & cool things to do

With over two million people living in the borough, Brooklyn is New York City’s most populated part of the city—but strangely, a lot of visitors and many Manhattanites don’t know much about it. Brooklyn’s big culture and attitude is reflected in its diversity of people, cuisine, and even languages. Many of the distinct Brooklyn neighborhoods are recognized as ethnic enclaves, hubs of a particular culture.

Brooklyn is easily accessible from Manhattan, most famously from the iconic Brooklyn Bridge, though there are subways and other bridges connecting Brooklyn to the other NYC boroughs. Because of its unique location in close proximity to Manhattan, and its many distinct cultures, however, Brooklyn has blossomed as its own formidable destination. And the many cultural changes in the borough have given rise to more open and more inclusive spaces for LGBTQ travelers. 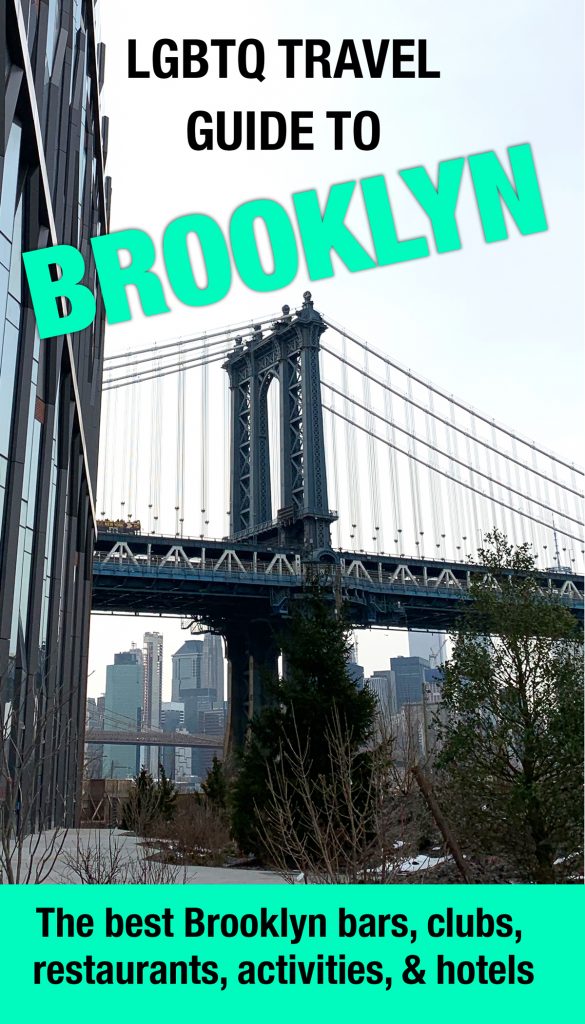 THE WEEKEND GUIDE TO BROOKLYN

Visiting Brooklyn is easy, and while some might be turned off from the borough’s history as a place for trouble, these days most of Brooklyn is accessible and great for tourism. From acclaimed cultural institutions such as the Brooklyn Academy of Music to the Brooklyn Museum and Prospect Park (designed by the same landscape architects who created Manhattan’s Central Park), plus new cultural highlights in the hipster scenes of North Brooklyn, Brooklyn is a gem. In the past year, the Brooklyn Museum has had a number of impressive exhibits including one on David Bowie, and currently one on Frida Kahlo.

In North Brooklyn, don’t miss the neighborhoods of Willamsburg, Greenpoint, and Bushwick. Home to many artists and musicians (and their subsequent studios and cheap-but-cool coffee shops), the area is great for urban exploration. The Bushwick Collective is responsible for much of the colorful street art you’ll find on a 4-block radius around the Jefferson stop on the L train.

RELATED: How to Visit NYC on a Budget

As the hipster hub of NYC (and maybe the world), Brooklyn’s neighborhoods of Williamsburg and Greenpoint are especially popular for foodies. Open only in the summer, the Brooklyn Barge Bar serves cheap eats and cold drinks on a barge floating in the East River. And the nearby Manhattan Avenue is home to a number of great food spots of many different cuisines.

The cozy Mexican restaurant Calexico serves the classics (like fish tacos), but plenty of innovative and exciting dishes such as a crispy brussels sprouts with peanut-chile salsa. And don’t miss the Calexico happy hour for the best deals on their margaritas (including a delicious jalapeño one).

No trip to NYC is complete without some pizza. Grab a slice from Joe’s Pizza on Bedford Ave in Williamsburg—plenty of celebrities order their pies here. Or for something a bit more contemporary, plan a night out at Roberta’s Pizzeria in Bushwick—a trendy pizzeria that also feels a lot like a dive bar, but serves one of Brooklyn’s best pizzas.

In Bushwick, don’t miss the budget-friendly Los Hermanos taqueria—a BYOB (bring your own beer) establishment that’s crowded all day and night. They make their tortillas on-site. For a little bit more romantic dining, the nearby Sea Wolf restaurant serves oysters and other seafood and usually has a DJ on weekends, making it an equally cool place to stop for a drink either before or after eating.

Across Brooklyn, you’ll find excellent Italian-style pizza at Sottocasa, great creole cuisine at The Gumbo Bros, Cuban food at Habana Outpost, and a huge variety of trendy options from craft pickles to Bahn-mi sandwiches and Berlin döner at the DeKalb Market Hall.

Where to Drink and Party

While a lot of the NYC gay nightlife is over in Manhattan, Brooklyn still has a stronghold on the queer nightlife. Brooklyn’s most popular gay bar is Metropolitan—a dive bar with events all week long and drag shows just about every night (and a great happy hour special).

Even when there isn’t a show on, you’re likely to bump into some of your favorite RuPaul queens while at Metro. Just down the street is the equally divey (and more affordable) Macri Park; people shuttle between the two depending upon the crowds at each. Both are great for first dates in NYC, too.

Nearby, The Rosemont is a newer gay bar that rarely charges a cover fee and feels a lot more casual and comfortable than the scene-y Metro. There’s a spacious patio in the back and often drag shows and other events taking place on the tiny dance floor.

USEFUL: A Guide to the Best Gay Dating App Around the World

For clubs, Bushwick’s House of Yes is a perennial favorite. They host a monthly queer party called Bad Behavior, but all their parties are always a bit queer and always LGBTQ-welcoming. Expect costumes, glitter, and disco balls no matter when you visit. Same goes for the larger Elsewhere club a few blocks away.

Further out in Brooklyn, the new gay club 3 Dollar Bill hosts a variety of techno queer parties and occasional big-ticket events. The club space veers masculine but parties are welcoming and they have a strict no-phone policy while in the club, so it’s the type of place where you can easily make new friends.

One of the first things I learned about Brooklyn when I first moved to the area (besides the fact that finding Brooklyn sublets can be tricky!), is that this borough is BIG. Each neighborhood has its own distinct vibe and culture, and getting from one end of the borough to another can often be challenging.

Part of that is because every subway route in the NYC MTA system goes to Manhattan except the G train. So if you’re in the south of Brooklyn looking to get up north, sometime the fastest way is to take a train across the river into Manhattan, change to another line, and head back across the river to north Brooklyn. It doesn’t make much sense and so that’s why so many in the borough end up using Uber and Lyft to get around. When you’re looking for a Brooklyn hotel, make sure to do some research and make sure you’re in the neighborhood you want to be nearest to.

Convenience and location makes The Tillary Hotel (a World Pride partner hotel) a great option for a Brooklyn hotel. It’s located in Downtown Brooklyn, walking distance to some of the best touristic sights in the borough including the Brooklyn Bridge, the Brooklyn Promenade, and the lovely Fort Greene Park. Rooms are spacious and the lobby has an open public space with lots of board games (including an oversized Scrabble board).

For another option, the BKLYN House Hotel offers comfortable guest rooms in a sleek, modern setting. Amenities on-site are relatively basic, but it’s in a convenient location to some of Brooklyn’s best nightlife in the north including the coolest bars and restaurants in Bushwick. The hotel is connected to Manhattan along a direct train line. Check BKLYN House Hotel rates on Booking.com here.

Many visitors to NYC might miss out on Brooklyn entirely during a stay in NYC, but truthfully you could spend weeks in Brooklyn exploring the LGBTQ life here and never have to visit Manhattan! There’s that many cool and hip and queer things to do in Brooklyn, it’s what makes it New York City’s best gay borough.