Home » Travel Tips » A guide to tipping around the world

One of the first things to shock me since moving to America was the constant need to tip. And to not just tip—but to tip BIG. Just about everyone gets a tip in America and it’s become a necessary part of my budget. Compared to my life in Europe, it’s a pretty significant difference—and one I’ve had to get used to.

I’m not complaining (well, I’m complaining a little), but after years of traveling the world, America is on a whole other level when it comes to tipping. And this American culture for service tips carries over when we travel, too. While in Mexico last week I couldn’t quite get over what rate I was supposed to pay for a tip. Should I stick to my new American habit of tipping big, or keep to the local customs?

When I’m traveling to a new place, I’m a notoriously bad travel planner and rarely look up the necessary tourist facts beforehand. So I find myself googling answers at the last minute (usually on the way to the airport). The problem is that there are always conflicting answers to the question of “how much to tip.” Of course, the local customs and norms are most important, but some of these change fast and vary depending upon the circumstance.

Thankfully, my friends at MyPostcard.com set up a useful country-specific guide which clearly outlines how much to tip and in what circumstances. 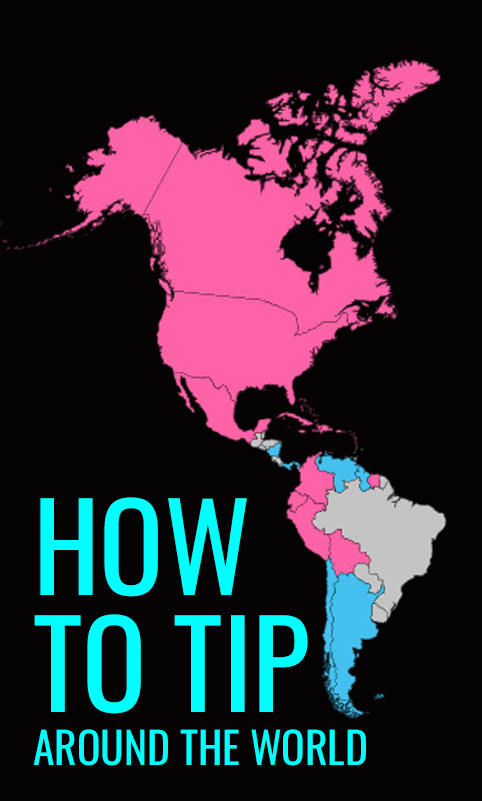 •••
How much to tip in the Americas 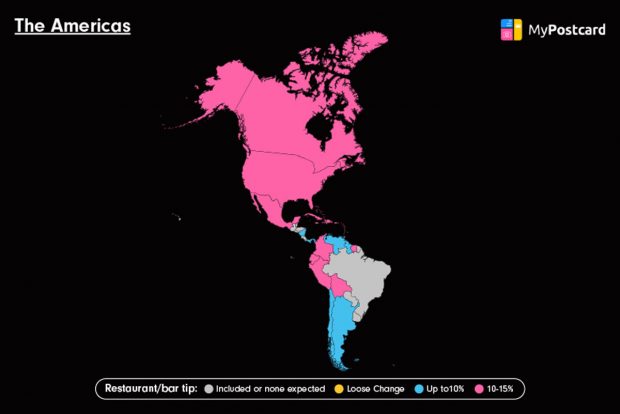 The United States and Canada both require pretty significant tips: 15-20% is the norm for restaurants, and a $1 per drink in the bars. It can add up quick!

In America, most service industry employees’ wages are almost entirely expected to be made up of tips (they’re legally paid under minimum wage because tips are part of their salary). So, even if you have bad service, you’re expected to pay a reasonable amount to make up for their wage. Trust me: I’m no fan of this cultural norm, but it’s the way it is and as a member of society (or even just a visitor), you’re expected to play along.

In Mexico and much of Latin America, tips are a bit smaller but still vary country-to-country.
One easy difference: you usually don’t have to pay a tip on top of the taxi fare (unlike in North America). See more details on tipping in the Americas here. 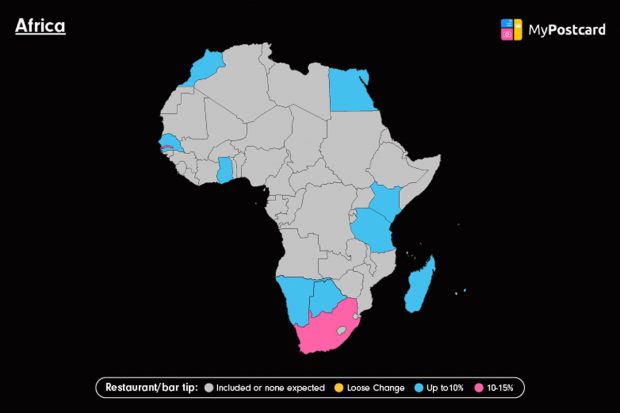 Northern African countries like Morocco and Egypt—with long-standing tourism industries—do require significant tips compared to other places. Every tour guide in Egypt was constantly asking for tips when I visited the country. Sometimes they even preferred tips in dollars or euros rather than Egyptian pounds.

In fact, that’s often the norm in many developing countries so it’s always useful to carry your home currency. See more details on tipping in Africa here.

•••
How much to tip in the Middle East 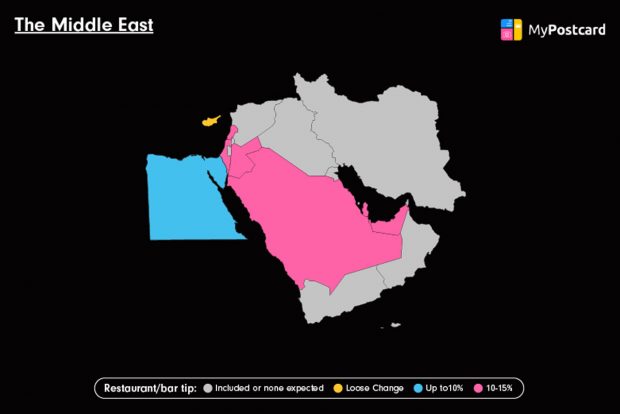 The Middle East is home to several strong economies and it’s that environment which then facilitates a culture of tipping. Jordan isn’t exactly a budget-friendly destination and tips are required for every tour guide, porter, and part of the restaurant bills.

In Israel, you usually can just leave spare change for your restaurant bills and at the bars you might just round-up. The big tourist hotspots (like Dubai) generally mean you’ll pay plenty in tips. See more details on tipping in the Middle East here.

•••
How much to tip in Asia and Oceania 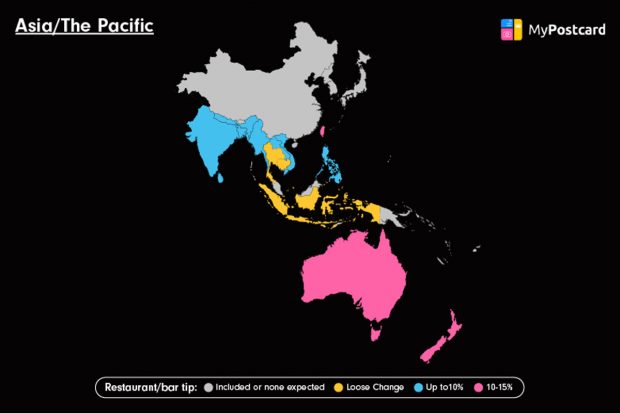 Australia and New Zealand have a pretty strong culture for sizable service tips, but they’re not always required. It’s increasingly common to leave 10-15% tips at restaurants and to tip per drink at the bar, too. In Southeast Asia, you might be expected to simply round up your bill for tips, but almost always your tour guides will require a decent tip.

In India, you’ll be asked for tips frequently and it’s common practice to tip. Because there is a lot of poverty and it is in fact a very affordable place for travel, you should expect to tip whenever you can—usually by rounding up at many street stalls.

And in restaurants and nice establishments, plan to leave a 10% tip at least. Traveling around India is hard because tourists are perceived as a quick way to make some rupees. So in general, tip when you are really satisfied with the service. Rickshaw drivers often try to take you to places you don’t need to go, and frequently inflate the fare—be aware and tip when the service is good.

Also in India: tip people who provide services for which are their sole source of income such as the women who take care of shoes at the entrance to temples, the men who transport people on cycle-rickshaws, the kids who sell necklaces near touristic sites. See more details on tipping in Asia here. 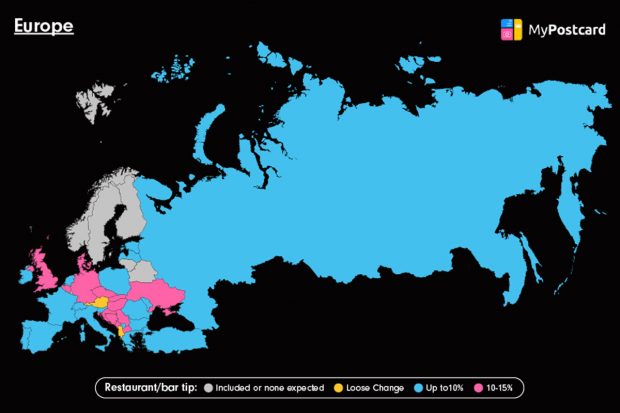 Much of Europe requires between 10-15% in tips, though some countries happily accept smaller tips. In Germany, for example, it’s common to round-up on your restaurant bills and maybe add an extra euro or two, while in the UK you would be expected to tip 10% at least.

A lot of European countries in the south expect tips, at the very least some extra coins, for drinks and food, while in the north you might not be expected to tip unless it’s exceptional. The drastic cost differences between countries can mean the tipping culture varies drastically from east to west, north to south.  See more details on tipping in Europe here.