It’s the beginning of the year and my inspiration (something I was looking for a few months ago) has come and gone. So, for a little recap of my travels, enjoy this travel meme: The ABCs of travel. (Thank you to Cheryl and Nicole for tagging me)

Age you went on your first international trip.

I went to Mexico City for a day when I was in third grade. Ever since, I’ve been fascinated with the city and can’t wait to go back again. I went once a few years ago but didn’t have enough time to explore much of it.

Best (foreign) beer you’ve had and where.

I like most beers, but the cheap beer in Berlin takes the cake. 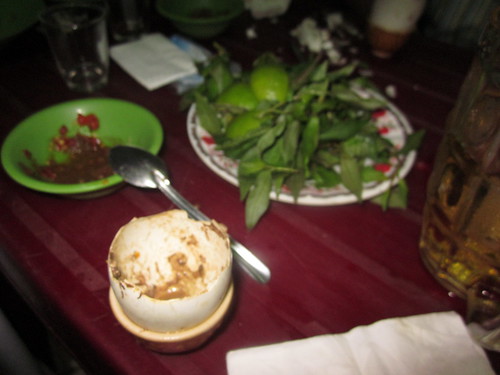 From my RTW travels, there are two countries that stand-out for their food: India and Vietnam. In India, I fell in love with Malia Kofta (get a recipe here). I always loved Indian food, but the food in India was that much better. In Vietnam, I tried a few bizarre foods (fertilized duck egg anyone?) but besides that, the food was actually some of the best I’ve ever had. Big thanks to my Vietnamese family for more than a handful of home-cooked meals, but I also enjoyed plenty of restaurants and street food in Vietnam as well.

Destinations, favorite, least favorite and why.

Ugh, I hate this question. Every place is too different to decide on a favorite. Iceland, Israel, India and Cambodia were all incredibly special and important places for me while I was traveling.

One place I haven’t liked very much is Prague. Both times I’ve visited, it’s been a bit disappointing. 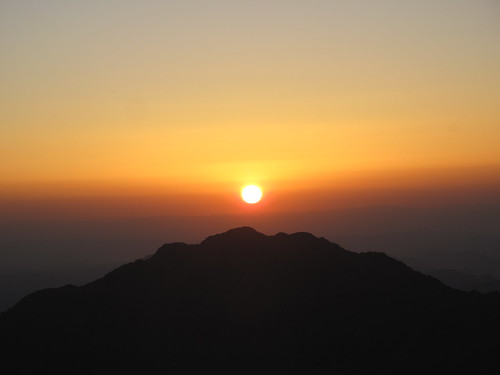 Seeing the sunrise from Mt Sinai was incredible

Event you experienced abroad that made you say “wow”.

Sunrise on Mount Sinai without a doubt. One of the most beautiful moments on my RTW travels.

I like boats. Mostly so I can sing “I’m on a boat” obnoxiously.

Freedom of choice. That feeling you get when you find cheap international flights to your favorite destinations. The moment you click purchase, when you board the plane, when you’re up in the air and don’t have a return ticket.

Incredible service you’ve experienced and where.

The people in Berlin. Some of the most interesting people I’ve met. 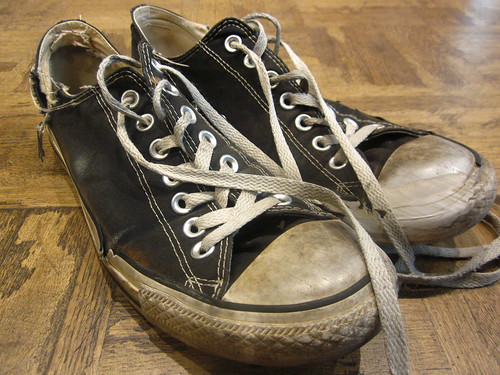 Journey that took the longest.

I think I had a few long train rides in India, but nothing too crazy. Pretty sure I didn’t go for more than 16 hours.

Keepsake from your travels.

This blog, isn’t it enough??

Let-down sight, why and where.

Petra was originally a disappointment. Well, not really a disappointment, I just didn’t agree that it was sooooo amazing like everyone made it out to be. But on my recent trip to Jordan last week with On The Go Tours, I decided I did actually enjoy Petra. So, I guess the biggest travel let-down for me is…. Chiang Mai! Another over-rated place talked up by a lot by travel bloggers. Don’t trust ’em.

Moment where you fell in love with travel.

Iceland! It was when I traveled to Reykjavik on a long weekend in 2009 that I decided to rethink a few things in my life. My short trip to Iceland set me on the course which eventually led me on this trip…which seems to have no end in sight.

The Czech Inn in Prague is a nice one, but the best place I’ve ever stayed was Bodhi Villa in Cambodia. (I’m still the FourSquare mayor, there!) 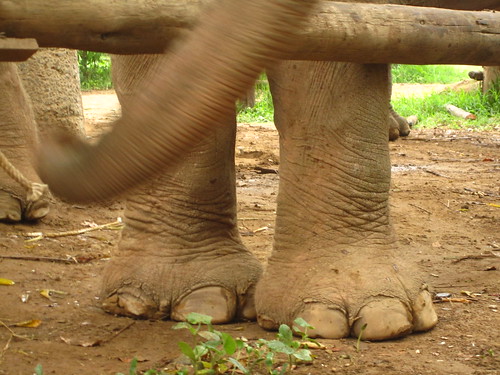 I have a lot of photos of feet.

Obsession—what are you obsessed with taking pictures of while traveling?

Feet. It’s a bit weird, but every time I see a sculpture or an animal or anything with legs, I try to get a shot of its feet.

Passport stamps, how many and from where?

Quirkiest attraction you’ve visited and where.

Probably the water park in Hanoi. Not a typical tourist attraction but it was such a hot summer day we decided to cool off at a local water park.

I get asked for a lot of recommendations, but anyone who plans to visit Israel, I always recommend the Breaking the Silence political tour in the West Bank.

Splurge; something you have no problem forking over money for while traveling.

I tend to splurge pretty often. Probably why I was able to blow through 20 grand in 15 months. 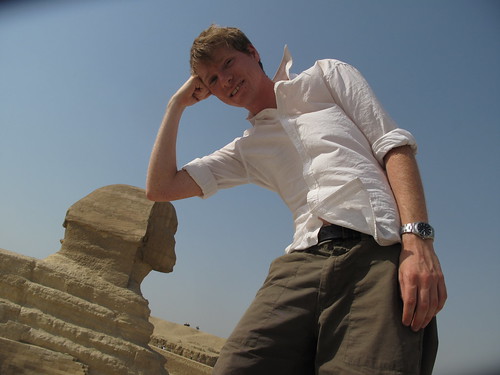 Me being a tourist in Egypt

I have no shame in being a tourist. I’m quite good at it. Whether it’s snapping pics of my food or a walking tour.

My few months living in Tel Aviv are a place (and time) I’ll never forget.

Visas, how many and for where?

Visas for Egypt and Israel (had to get an extension so I could stay more than three months there), most Southeastern Asian countries and my student visa for Australia (from 2006).

Wine, best glass of wine while traveling and where?

I always loved the red wine in Spain. Whether it comes as sangria or calimocho (red wine mixed with Coca-Cola). Yes, calimocho. So good! (Don’t judge)

eXcellent view and from where?

Did I already mention Mt Sinai? If you want more, check my post on the three places where words fail.

Oh, I’ve been traveling most of my life. Became a part of life with a parent working in the airline industry!

Zealous sports fans and where?

I was in Düseeldorf, Germany during the 2006 World Cup games. It was the ONLY major German city NOT hosting a game! I almost didn’t have a bed to sleep in the city was so crowded. Also, I watched the 2011 World Cup final in Jerusalem on Ben Yehuda street. That was fun.