What You Need to Know About Gay Berlin

Berlin is a vibrant, gay-friendly city—one of Europe’s most popular destinations for LGBTQ tourists. But like any tourist to Berlin will discover, there’s a lot more to the city’s gay scene than the traditional gay hotspots. The beauty of Berlin as a travel destination lays in the fact that this is a growing city, evolving out of a turbulent 20th century to become one of today’s leading cities—politically, economically and culturally. It’s no wonder that Berlin makes it to the top of most “best gay travel” lists! But, most gay guides to Berlin don’t fully showcase the diversity of LGBT travel options—that uniqueness that’s made Berlin so special and so gay-friendly.

Luckily, I’m here in Berlin to share the coolest things to do—those gay events, festivals and parties that make Berlin special. The ones that make this one of the world’s best gay cities. For anyone visiting gay Berlin, though, here’s the things you need to know. And for more about Berlin, check out my full gay guide here. 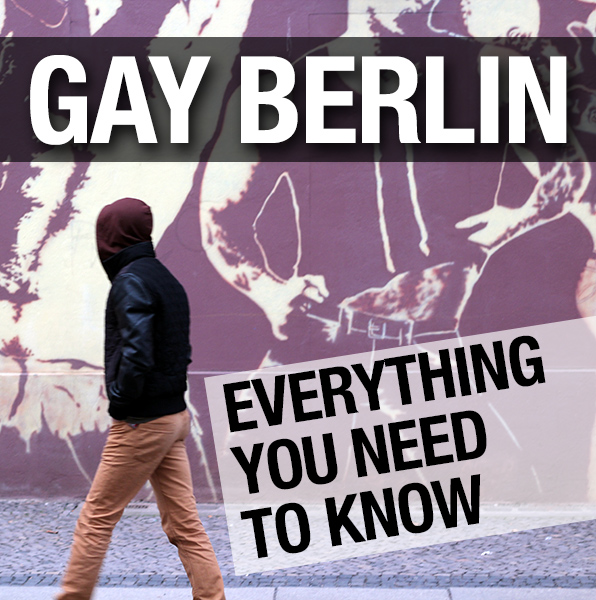 Berlin has a long history of gay activism and gay culture.

Any gay guide to Berlin requires a bit of a history lesson. It’s not just the current trendy gay bars and clubs, but also the history that makes Berlin so important for LGBT tourists. Why? Because in 1918 a doctor named Magnus Hirschfeld created in Berlin an Institute for Sex Research that was later burnt down by the Nazis (during the famous book burnings of 1933). Decades later, the gay mayor of Berlin declared the city “poor, but sexy,” catapulting the city yet again as one of the world’s most sexual destinations. Berlin was also the site of one of the world’s first gay pride events, taking place in 1919 near Nollendorfplatz—at that point, the gay mecca of Europe.

When Christopher Isherwood, that gay icon from Britain who made Berlin his home in the 1920s, wrote about Berlin, he captured the free-spirited culture that made the city so liberal and open in-between the world wars.

For more about Berlin’s gay history check out the book Gay Berlin: Birthplace of a Modern Identity by Robert Beachy, just $12.99 on Amazon.

Summer isn’t the end of gay Berlin – things heat up in the winter, too!

Berlin is gay all year long. However, weather isn’t always so friendly in Berlin, independent of your sexuality or beliefs. For those who enjoy the amazing freedom of the naked body, the FKK (Freikörperkultur, as Germans call it), the summer months are best. Sexy guys on bikes, in short pants, reading on a bench or lying naked on the grass mostly in Tiergarten park… However, winter has its own secrets, and the gay scene thrives in Berlin’s gay saunas, clubs and bars.

Looking for more about gay Berlin? Read my guide on The Guardian featuring interviews about Berlin’s best clubs, bars, culture and drag shows.

While in many cities around the world, winter signals the end of going out and the beginning of a season of Netflix, in Berlin, this isn’t the case. Nightlife is as good as ever. Clubs like Berghain keep their cool, with the famous Saturday night queue often just as long as in summer. Regular gay parties (see below) are a part of going out in winter—coat checks are just more popular (but still as cheap as always, just 1€ or 2€).

Winter festivals are also quite common in Berlin, including the Berlinale International Film Festival every February. The world-renowned film festival has a long track record supporting queer cinema, running LGBT-themed films as part of the popular Panorama competition and awarding the prestigious Teddy Award to the best LGBT film of the festival.

For the best on gay nightlife in Berlin, read my full guide to Gay Berlin on Discavo.com, or my Hipster Guide to Berlin here.

Historically, Berlin’s Schöneberg neighborhood, especially around Nollendorfplatz, has been the city’s gay area. You’ll find many gay-owned bars, restaurants and other businesses located there. Over the years, though, Schöneberg has largely remained the same, while the rest of Berlin has been transforming since reunification in the ’90s. The diversity of bars, restaurants and clubs in Kreuzberg makes it easy to get around and a tourist-friendly area. The über-hip Neukolln neighborhood has become Berlin’s hotspot, often called the up-and-coming Berlin neighborhood. In 2013, one of Berlin’s longest-running gay clubs, SchwuZ, moved from Kreuzberg to Neukölln, marking a shift eastward in the gay Berlin scene. With other gay bars opening up in Neukölln, like the small dive bar & open-minded The Club, Neükolln is no longer up-and-coming—it’s the heart of the new gay Berlin.

For a guide to all of Berlin’s best bars, clubs, activities and cafés, check out the new QueerBerlin map. Part of a joint effort by myself (Travels of Adam) and BertaBerlin, the QueerBerlin map offers three unique walking tours (with LGBT points of interest) and nearly 50 other recommended places. The map is available for just 5€ and you can order online or pick it up in a handful of shops. Learn more about the QueerBerlin map and get a preview here.

These changes aren’t really unique to Berlin, though. Many cities have seen the gay life moving from historic gay neighborhoods, often where the LGBT rights movement was fought (and, now, won) into trendier, more mixed areas. London’s Soho, for example, has changed dramatically with many gay businesses being forced out because of rising rent prices. While that hasn’t happened per say in Berlin, the shift in the gay scene is definitely present. Schöneberg is still home to Berlin’s popular gay hotels like Axel Hotel and the Tom’s Gay Hostel, but those gay tourists looking for newer and trendier things to do are discovering other parts of the city—namely Kreuzberg and Neukölln (both home to a number of gay-friendly hotels). Compare more Berlin hotel prices here.

Berlin is changing. And while Nollendorfplatz will always hold a special place for gay tourists, there’s more and more available throughout the city.

For more about Berlin’s neighborhoods, read my Neighborhood Guide to Berlin which includes recommended hotels, hostels and holiday apartment rentals in Berlin.

The cool thing about Berlin’s gay scene is how big and diverse it really is. While Berlin isn’t actually Germany’s “gay capital” (that title goes to Cologne), Berlin’s nightlife and cultural offerings are so diverse that there’s really something for every type of LGBTQ tourist. If you’re gay and Jewish, there’s a party just for that. Gay and Turkish? One for that too. Looking for drag? Check out the SISSY parties. Want to sing karaoke with a bunch of gays? We’ve got that too. Gay Brazilian party? Looking for twinks, for muscles, for naked sex parties? For lesbian punk clubs? For bearded hipsters? Queer punks, student parties, Madonna nights, underwear-only clubs, leather or dirty fetishes? Berlin really has a gay party for every type of person.

While Berlin’s nightlife options are wide and varied, it can be difficult to find out about what’s happening when. There aren’t many local gay guides to Berlin online and so many of the parties are kept secret, to those “in-the-know,” keeping Berlin’s nightlife scene supposedly safe. There are reoccurring party nights and gay events happening day-by-day, but Berlin’s best gay parties are the ones that happen less frequently—usually every month or just bi-monthly. Sometimes even quarterly or annually. The legendary SNAX parties at Berghain, open to gay men only for Easter weekend and again in November, are sex-fueled parties people travel from the world over to attend. More alternative gay parties happen with a bit more frequency. Note that there are obviously many more gay parties & events in Berlin and this doesn’t intend to be a comprehensive list, but rather a small directory of my favorites and regulars, of which I’m sure I’ve forgotten some…

Gay Parties to Look Out For

Buy the QueerBerlin map for just 5€ at a handful of shops – or order online before your trip.
BUY NOW

Daily Parties to Look Out For

Stay tuned for future blog posts about Berlin’s best gay parties. Join the Travels of Adam mailing list to be the first to know about new gay guides.